The Atlanta Hawks are in a crucial stage in not only their season, but the state of the franchise for years to come. The reoccurring theme that league experts and causal fans have on the Eastern Conference team over the last decade is that Atlanta is “stuck in the middle of the pack”. The term means the Hawks are a good basketball team; however, people don’t expect the team to make a legit run past the Eastern Conference Semi-Finals where their season has ended all but once in their team’s history.

Also, Hawks fans are split on the future of the team as well because some of the “True Believers” want to see the level of commitment of not only winning but to make a championship run and camaraderie from the front office to even show support at home games. Although you would like for the Hawks front office to take on the approach of their fan base, as mentioned above, there’s a level of uncertainty.

Moving along, you have the typical fan that wants the Hawks make a legitimate move, preferably a trade that will provide a significant upgrade to the roster. However, you have fans thinking if we aren’t going to make a move, we should “tank”. As a die-hard supporter of the Atlanta Hawks, there’s nobody who would prefer the organization should keep the current roster intact. The front office has a simple choice that really isn’t that difficult; either decision would garner support from the fan base if they stood back and looked at the whole picture. The Eastern Conference isn’t very deep or strong and there’s only one dominant team, the defending NBA Champion Cleveland Cavaliers.

Cleveland is the front runner of course because of LeBron James. You could put LeBron on every team in contention for a playoff spot in the East and they would be in first place. However, the Cavs roster or style of play prevents them from being considered flawless team or even a runaway team in the East. The harsh reality is the Eastern Conference is a pretty mediocre conference at best. Atlanta in a position that if they were to be able to earn the number 2,3,6, or 7 seeds, they would miss meeting Cleveland until the Eastern Conference Finals. Assuming the Cavs would hang on as the top seed with a current 2.5 game lead over the Boston Celtics.

As a team, the Hawks have three areas of concern to improve if they are going to pose a threat in the Eastern Conference which is the turnovers, three point FG%, and effort. Last season, the Hawks gave Dennis Schroder the opportunity to be a starting point guard in the NBA Playoffs prior to their trade of  Jeff Teague to the Indiana Pacers days before the 2016 NBA Draft. Without question, Schroder is a pure shooter and provides a more explosive threat for the Hawks offense. However, he hasn’t fully grasped the total concept of being a point guard. Schroder, in comparisons with Jeff Teague, Dennis is ranked #7 in turnovers in the NBA and has over 100 fewer assists than Teague.

If the Hawks are to go on a run, Dennis Schroder will certainly need to continue the offensive prowess that he’s shown, but also take better care of the basketball and find his open shooters for Atlanta’s offense to reach their full potential. Also, the Hawks as a unit should improve their turnover ratio, as they are currently ranked 24th in the NBA in turnovers. For a team attempting to make a legitimate playoff case, that’s unacceptable and is a glaring statistic to describe the inconsistency displayed by the Hawks all season.

At one point, the trademark of the Atlanta Hawks under Coach Mike Budenholzer was their ability to knock down perimeter shots behind the arc, a key contribution to previous Hawks playoff teams nightly, in particular with former shooting guard Kyle Korver. Unfortunately, the outside shooting game which was once an area of strength has disappeared. Currently, the Hawks are a dismal 24th in the NBA with a 34.4% three-point percentage. In order to win a championship, you don’t necessarily need to attempt 30 three-pointers every night, but you should shoot at a respectable percentage.

It’s hard to imagine where Atlanta would be ranked without the emergence of shooting guard Tim Hardaway Jr. over the past two months. The guy has been simply incredible and a godsend for Atlanta. I don’t see anybody within the current roster stepping up enough to make a big enough difference to help Hardaway from behind the arc; although Kent Bazemore has emerged lately.

If the front office plans to compete, they should make a trade for a prolific three-point shooter. Yes, they traded Kyle Korver a few weeks ago, however what they need is someone who can create their own shot as well as catch and shoot. The obvious question is who could they get? The NBA is full of those types of players and depending on the return status of Chris Paul in Los Angeles, possible targets are former NBA Sixth Man of the Year and Hawks shooting guard Jamal Crawford or possibly J.J. Redick from the Clippers. 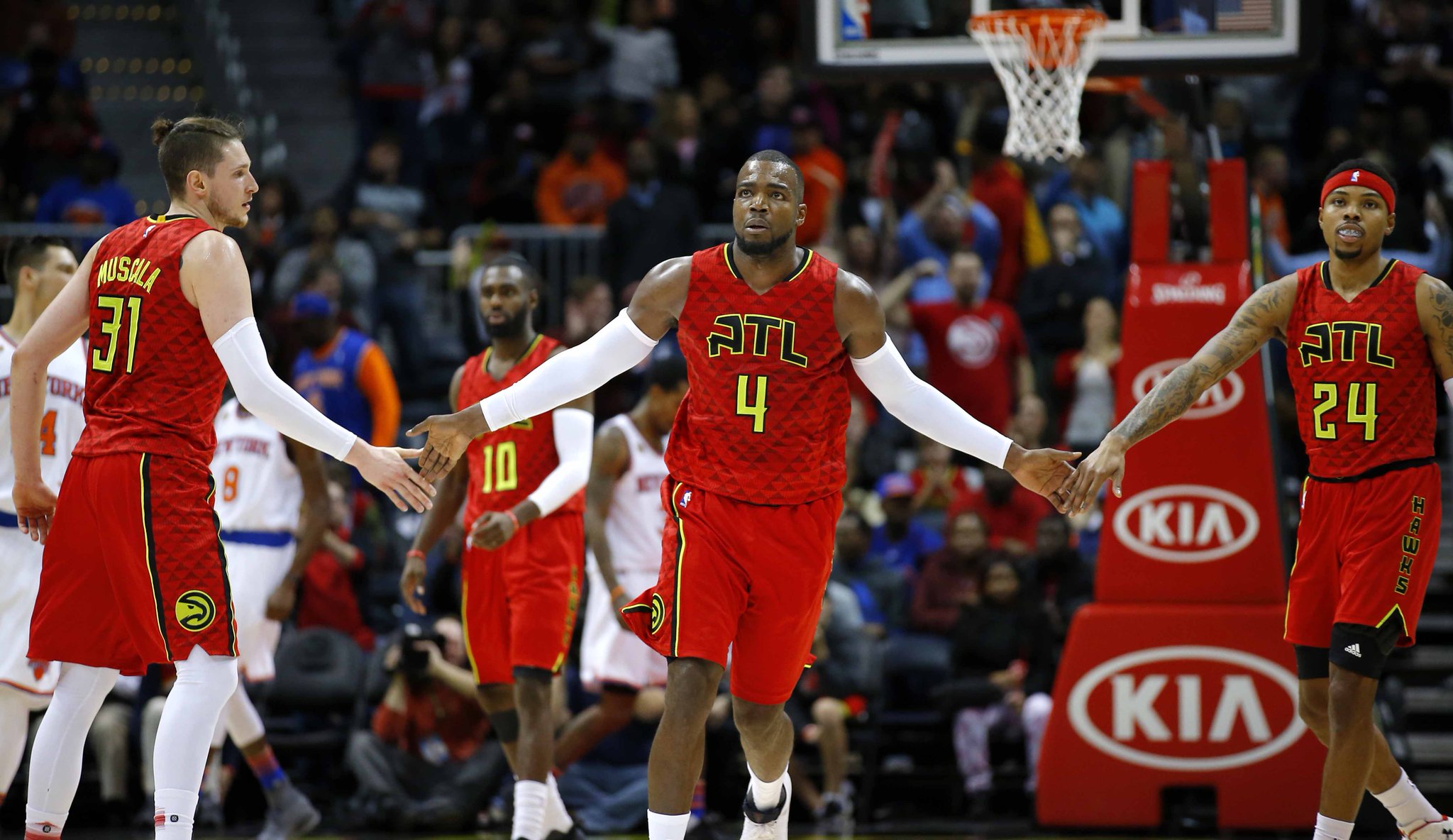 In conclusion, one of the glaring issues the Hawks have to address after the All-Star Break is their inconsistency in effort from night to night. Although I’m not in the locker room, the lack of leadership appears to be the issue with the current roster. No, I don’t think the issue is the players not caring about winning basketball games, however, I feel that if/when the Hawks struggle in their losses, there’s nobody that will step up and hold their teammates accountable. A lack of accountability can be a deadly thing in a locker room and it shows on the court at times. I’ve never seen a Hawks team be completely blown out as a playoff bound roster than I’ve seen this season.

In reference to the blowout losses, we don’t mean by a 16 or 18 point loss, we’re talking about 30 point losses. When you’ve seen a team constantly struggle, fans gain the impression that you have given up and will either leave the game or turn the channel. As a professional, your pride should encourage you to refuse to lose in such an embarrassing fashion, however, we’ve seen this too many times for Atlanta this year. If the Hawks plan to make a legitimate run to finish the regular season, someone in the Hawks organization must light a fire under a group of players who need a leader. They owe it to the fans, the organization, and most of all themselves. If the Hawks can fix those areas of concern, we could see our team prepare a second half run that could lead to a possible return to the Eastern Conference Finals.
By: Michael R. Thomas II-
@ChosenOne_MT10