The last Nine Months for the Atlanta Hawks has been a wild one to say the least. Al Horford leaves for the Boston Celtics for over less than 5 million dollars, and his predecessor? None other than the hometown kid turned dominant center around the league since 2004, Dwight Howard. Before the 2015-2016 season, no True Believer could have envisioned this roller coaster after winning 60 games less than two years ago . We signed Kent Bazemore to a lucrative deal that currently is viewed as a mistake by the Hawks front office. Also, the Summer brought rumors that Atlanta was  willing to part ways with their best player, Paul Millsap, in an effort to keep Horford; and if that wasn’t bad enough, rumors surfaced again during the Regular Season that Millsap was on the market for trade.

Wait a second, let’s not forget the Hawks traded long time All-star Jeff Teague to the Indiana Pacers . Fast forward to the 2016 NBA Draft, the Hawks turned the Teague deal into drafting Taurean Prince, who emerged as a key contributor and eventually started in the Playoffs. Entering the season, the fever around this year’s squad was through the roof in Atlanta. The hype was short lived as the Hawks would go through many highs and lows, which also saw Kyle Korver, a bonafide fan favorite, depart to the NBA champion Cleveland Cavaliers in a trade. To this day, many wonder… Why would Atlanta trade a key component to a team whom eliminated you in sweeps  in back to back postseason appearances? 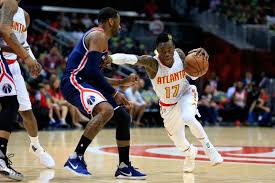 Moving ahead, along with a split front office on key upcoming and past decisions; the Hawks are two games away from advancing and facing a very winnable second round opponent in the Boston Celtics. However, the Hawks will have to win out against their Southeastern Division rivals, the Washington Wizards, a team they’ve yet to win on the road game against this season. I could tell you that the Hawks simply don’t have an answer for John Wall and Bradley Beal, but with better execution, the Hawks could be up 3-2 in the series. Dennis Schroder has matched John Wall throughout the series. Dennis has gone from being a talented, raw, erratic point guard to a very efficient floor general that has blossomed in the post season. Paul Millsap has been the “Anchor Man” we’ve grown to love and cherish in his Hawks tenure after a dismal Game 1 in which he was manhandled by Markieff Morris. He’s dominated the Wizards in the last four games averaging 24 points per game and adding 11 rebounds. In order for Atlanta to make a comeback and advance further in the NBA playoffs; Millsap and Schroder have to outplay Wall and Beal. Also, the winner of this series will need their a upporting cast such as Markieff Morris and Marcin Gortat for Washington; As for the Hawks, Kent Bazemore, Dwight Howard and others will have to step up and contribute. If those two stars for each team don’t show up, they don’t have a chance.
I think what you’ll see with Atlanta tonight will be similar to what the Memphis Grizzles did against the  San Antonio Spurs last night. Mike Conley and Marc Gasol both played the entire fourth quarter. Coach Fizdale went on to say that the two stars for Memphis wanted the challenge of staying on the court, because it gave them the best chance to win. It didn’t quite go the way they wanted, but I see a similar situation with the Hawks tonight; especially with coach Mike Budenholzer showing the trust and patience of leaving Schroder in games early with foul trouble. The Hawks are in a good spot despite a crazy year and if this series continue to go as we’ve seen so far, the Hawks will force a Game 7, which I feel confident in saying Atlanta can win despite being on the road. Another under rated factor for the Hawks to win the series is limiting the turnovers. Turnovers have killed Atlanta , averaging a woeful 15 per game. Although they are only averaging around 8 at home; if Atlanta can take care of the ball and win the turnover battle, they will advance.