Not much to note from the rams side of things in the injury department. Starting LB Mark Barron had full participation and is going to start for LA. WR Michael Thomas is doubtful as he did not practice this week but it will not be a huge blow to LA’s offense as he only has 93 yards on the season (75 in meaningless week 17 game.) The very dangerous return-man Pharoh Cooper was given no game status so it’s assumed that he will play. Special teams has been an issue so the falcons would like him not to be at full strength. Another important injury to the rams is their Place Kicker Greg Zuerlin who was placed on the IR during December. That should benefit the falcons if it does come down to field goals or if the defense can bend but not break.

The injury report for the Falcons was concerning earlier in the week as most players who went out in Sundays game were listed as Limited and DNP. Julio Jones has been On and off the injury reports this whole year so it wasn’t a great concern. Devonta Freeman went out in the 3rd quarter in the Carolina game and it didn’t look great but he did practice this week like Julio. Andre Roberts was a concern with a knee and ankle injury but is expected to play. In case he can’t go, Taylor Gabriel, coming off of a hamstring injury is playing and did field kicks in practice this week.

Alex Mack, All-Pro Center, also had a calf injury that he has been battling but has practiced this week. Dan Quinn informed the press today that everyone will be ready.

All Falcons on the injury report ready to go vs. Rams. No one will be listed as questionable, team said

Good news for both the Rams and Falcons that most of the players will be active.

At the beginning of the year, Steve Sarkisian was under fire for not fully utilizing the weapons at his disposal. While he has gotten better, he has not been great in switching up his play calling. A lot of games it seems as if he has been calling plays the same. A good offensive coordinator will switch up his plays to counter the weaknesses of the defense but Sarkisian seems to call plays the same every game. He is also very committed to balance. This year it has seemed he’s more concerned with having a balance of run and pass plays than winning. For example, when facing a bad pass defense in Seattle, Sarkisian called 30 pass plays and 27 run plays. That shouldn’t be the ratio if you have a great QB, WR1, and WR2 as well as you facing a bad pass defense. Those runs are also low percentage runs such as the toss play he runs a ton. He needs to change his playcalling based on the looks the Rams are giving him rather than have a predetermined set of plays. Sarkisian is going to have a problem with this because of Wade Phillips changing between 4-3, 3-4, and other defensive looks to confuse offenses. Hopefully the experience Ryan has will help him this game to identify the defenses. Phillips has taken a bad defense and made them good while Sarkisian has regressed a great offense. Part of what Phillips has done this year is use different fronts on the line such as using a 5 man front which has led to Aaron Donald getting 11 sacks from an interior line position as well as 48 total sacks which is good for 4th in the league. The Falcons are tied for 3rd in sacks allowed with 24. Levitre being injured will lead to a little more sacks especially with Donald being in the interior. 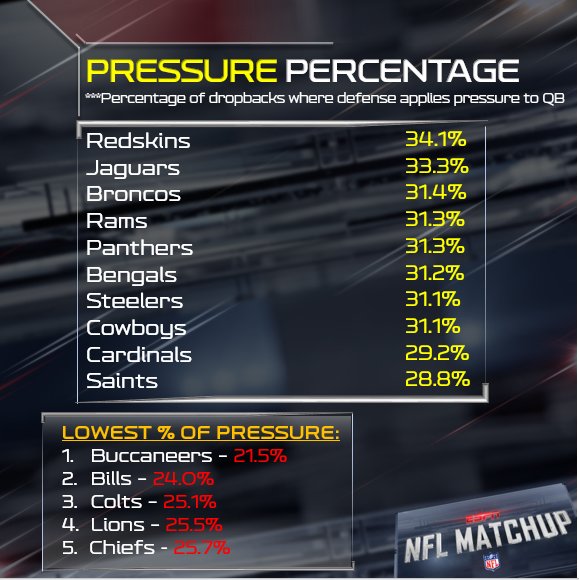 Pressuring the Quarterback doesn’t always result in sacks, but it forces the offense into off-schedule timing and QBs into mistakes- a big win for the D.#HTTR #Jaguars #BroncosCountry #LARams#KeepPounding #Bengals50 #HereWeGo #DallasCowboys#BeRedSeeRed #GoSaints #Bucs

According to NFL Matchup, the Rams are the 4th best in the league at applying pressure and in turn are a very aggressive defense. Expecting Ben Garland and Wes Schweitzer to stop a DPOY candidate is a dream so it will be on Alex Mack and Sarkisian. With Mack, he needs to do his job but a little extra especially on double teams. For Sarkisian, he needs to utilize screens, quick throws, and an interior running game. Falcons faced a similarly aggressive defense last week and Sarkisian game-planned for that. Matt Ryan has also played very well under duress, especially the last few weeks, and his experience will also help him keep a cool head like he has had under pressure.

Devonta Freeman and Tevin Coleman In the Passing Game vs. Rams’ Linebacker Core

In the last few games, Devonta Freeman and Tevin Coleman have been used a lot the past few weeks starting with the Tampa Bay game in week 15. Devonta Freeman got his first receiving TD this whole year last week against Carolina and should have much more if Sarkisian utilized him correctly the first 14 weeks. Tevin Coleman was also a major weapon last year in the passing and screen game which forced defenses to respect both aspects of both runningbacks. The linebackers on the Rams will most likely be the ones covering Coleman and Freeman and so Sarkisian needs to utilize the speed difference with screens but also wheel routes, swing routes, and texas routes. I would like to see more Texas routes used because Linebackers against the Falcons are forced to overplay and play closer to the sideline and so that will allow the RB to run a flat route but cut inside. This route has been used some by Sarkisian but I would like to see it utilized more.

Keys to the Game

Todd Gurley has become a dominant force this year both as a receiver and running back by leading the league in scrimmage yards. He’s an explosive back who will break off a long run eventually. Gurley has a habit of gaining 3-5 yards every carry and then out of nowhere, he will break an 80 yard TD run untouched.  It will be interesting to see how Quinn and Manuel decide to contain Gurley although it’s much easier said than done.

The Colts held Gurley to his lowest Yards per Attempt total this game the way they did it is by setting the edge with their outside linebackers and defensive ends. De’vondre Campbell will be extremely important to setting the edge to make sure Gurley can’t bounce outside.

Of course, it is much easier said than done but It will be interesting to see how Quinn and Manuel decide to gameplan against Gurley.

The Falcons, this year have been poor on defense in the turnover department. Going into Week 17, they were tied for last in the NFL in TOs forced but after the 3 INTs, the Falcons are 27th in the league in TOs forced. The good thing is that they are 9th in TOs from their offense. The Falcons are 5-1 this year when they win the turnover margin this year so it’s important for the offense to make the correct decisions and for the defense to be “fast and physical” like Dan Quinn preaches.

This is not necessarily a key to the game but it’s a point Sarkisian needs to address. In my opinion, the falcons have been much better this year when going no-huddle as Ryan gets to control more of what is called. It’s also important because in the NFL, as opposed to the NCAA, there are around 22 defensive players and less than 10 defensive line players. The falcons would benefit from running the no-huddle because the defense doesn’t have much time to set up and read the offense as they normally do. They also can’t make substitutions so on long drives it’s important to make the defense tired. They don’t necessarily have to immediately get up to the line and snap the ball. They can set the ball and allow Ryan to read the defense and the defense still won’t be able to substitute.

I believe this is going to be a shootout for the most part with a few defensive stops mixed in. I think it will come down to the wire though with Matt Ryan throwing the game winning TD. The way the Falcons win this game is to score more than 20 points as they are undefeated when they have. What’s also important is for the Falcons to eliminate drops and penalties as that has been holding this team back this year. The falcons are their worst enemy and that will hold true this game but if the Falcons can limit their mistakes, they should be headed to Philadelphia next week.